Roofing Market Trends? We’ve Got You Covered (and Re-covered)

The U.S. residential roofing is big. Based on Home Innovation’s Annual Builder and Consumer Practices Reports, about 17.5 billion square feet of it was installed on homes last year. The reports also concluded that nearly 85% of total residential roofing volume is installed on existing homes as either a full or partial replacement of existing material. On average, the age of the existing roofing in full replacement was slightly more than 19 years. About one-third replaced their roof because of leaking; one third because of storm damage; and, one quarter anticipated roof failure in the near future due to a deteriorating roof. Only 3 percent stated they wanted to improve the appearance of their house, and 2 percent claimed a pre-mature failure. 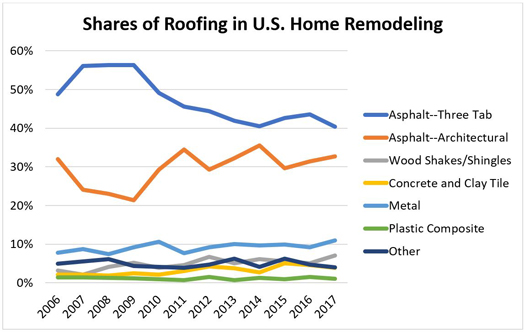 Asphalt shingles are used in more than 80 percent of home roofing and re-roofing projects in the United States. In new homes, most builders opt for architectural asphalt shingles. For roofing replacements, 3-tab asphalt shingles are still the most popular – briefly resurging in popularity in the uncertainty of the mid-2000’s housing market collapse (see chart above) – but declining again after home values begin rebounding. The appeal of three-tab shingles is that they are suitable for most housing types, they are inexpensive, and they blend into the surrounding neighborhood as existing homes are most likely to have 3-tab shingles.

Other trends worth mentioning include – metal roofing continues to become more popular, not only as accents over front porches and bay windows, but as full-house replacements. Most are painted steel that have standing seams or vertical ribs. Stamped metal tile represents only a small fraction of metal roofing on homes. Also underway is a decline in the popularity of traditional clay and cement tile roofs. The once-popular wood shingle roof market has suffered a major decline in the wake of improved durability, greater attractiveness, and lower cost of its primary competitor—architectural asphalt shingles. Plastic composites, while making some gains in the past few years, still represent a small segment total roofing installations. Average slope of roofs on new homes has remained at about the same – but declined slightly in the past decade.

What Else is Happening to Roofs?

Beneath the roofing, virtually all new residential roofs have wood-based panel sheathing. OSB remains the dominant type while plywood trails in a distant second. And thicker roof sheathing – 3/4" and 5/8" – are being used more, replacing the 7/16" and 1/2" thicknesses traditionally used. ZIP System® now represents about 4 percent of new home roof sheathing. Topping off the sheathing, our Builder and Consumer Practices Studies reported in 2018 that synthetic underlayment is now just at a little less than half the market and growing at the expense of asphalt felt while self-adhering is about 10% of all roofing underlayment installed.

In roof structures, trusses had long been the most popular type of roof framing in new homes. However, when the housing market tanked in the mid-2000’s, rafter framing briefly regained the dominant position. Due to the economic conditions, so many truss shops closed that builders found themselves returning to rafters just to get their homes built. Aided by the housing market rebound, trusses now comprise more than 70 percent of the roof structural material market. Looking forward, a recent Home Innovation study reported that builders, on average, will begin using trusses more often than they currently do, due to the increasing labor shortage, so the outlook for truss fabricator remains good.

Got more questions on Roofs? For your own personal guided tour – at the County level – through our data on Roofing Material, Roofing Underlayment, and everything else you want to know about Roofs, contact me. I look forward to talking with you.